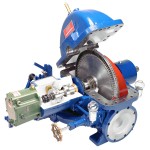 I wanted to use this newsletter to tell the history of Skinner Power Systems. I think you will find it rather fascinating the Skinner history and the fact the company has stood the test of time and is still in operation today. The simple steam turbine is still a viable option in the rotating equipment marketplace of today.

Skinner Engine Company was started in 1868 by inventor Le Grand Skinner who started building steam engines in a factory in Herkimer, New York. The steam engine converted steam energy into mechanical energy by injecting steam into a cylinder to drive a piston back and forth. This mechanical energy was then used to drive other machinery. The engines of various sizes and configuration attracted many customers with a wide range of applications.

In 1873 Le Grand opened a manufacturing plant in Erie, Pennsylvania and moved the headquarters to Erie. With its close proximity to rail and water shipping this allowed expansion of Skinners customer base. Skinner set high standards for product quality and performance by establishing an unconditional guarantee for his company’s product.

In search of a different product to offer, Skinner went to Germany in 1910 and studied the “Uniflow” engine. Upon his return to Erie in 1911, Skinner developed his own version of this engine. The Skinner “Unaflow” engine was its most widely sold design working well in land-based and marine applications. In fact, during World War 2, Skinner’s unaflow was installed in many US Navy ships.

The company expanded under Skinner’s leadership until his death in 1922. The tradition of quality products, excellent customer service and innovation remained throughout these years and continued as the management passed to Skinner’s son Allen and then to Allen’s son J. Le Grand Skinner.

In the 1950’s the company added industrial mixers to its product line and was serving customers in North and South America. With the death of J. Le Grand Skinner in1963, the Skinner Engine Company was sold to Patterson Industries from Cleveland, Ohio. Patterson manufactured a line of industrial pumps and around this time acquired the Dean Hill Pump Company who was base in Indianapolis, IN. Now the moment everyone has been waiting for:  The Dean Hill Pump Company manufactured industrial pumps and STEAM TURBINES!! Dean Hill formed after World War 1 was the product of the merger of two companies: Hill Turbine Company and Dean Brothers Pump Company. Over the next four decades Dean Hill manufactured nearly 20,000 turbines and pumps. By the early 1960’s, Dean Hill expanded to overseas market and established and international presence by granting a manufacturing license to a company in France called Manubat.

In the mid 1960’s, Patterson closed the Dean Hill plant in Indianapolis and moved all pump and turbine manufacturing to the Skinner operations in Erie. Now Skinner Engine Company had four products: Steam Engine, Pump, Industrial Mixer and STEAM TURBINES!! Considering that both the steam engine and steam turbine use steam to create mechanical power, the two products are totally different from each other. Whereas a steam engine has cylinders and pistons, a steam turbine does not. The turbine converts the energy in the steam to mechanical power by injecting steam through nozzles into a case containing a bladed wheel mounted on a shaft. The steam is channeled and directed against the blades on the wheel causing the wheel to spin. This rotary motion creates mechanical shaft power that can be used to drive other equipment.

In 1968, Banner Industries a company based out of Ohio acquired Patterson Industries. In 1973, Banner reorganized its operation and moved all pump manufacturing from Erie to a plant in Georgia. This left only three products at the Skinner plant in Erie. By the mid 1980’s Banner Industries was struggling and although Skinner was profitable decided to sell the Skinner operations in Erie.

In 1986, Gerald Ryan an Erie entrepreneur, and several other investors formed Ryco Holding Inc. and acquired Skinner from Banner Industries. Ryan the CEO and principal owner guided Skinner into the global export business for turbines and turbine generator sets. This move proved advantageous for Skinner as it boosted sales to $17 million by the late 1990’s.

In 2002, Klaus P. Fischer who had recently retired from Elliott Company in Jeanette, Pa. was looking for a new business opportunity. He learned of Skinner Engines Company’s turbine capabilities and determined there was sales growth potential for the Skinner turbines. He wanted to continue the “Skinner” name because it represented a lengthy tradition of reliable products, innovation, and fair price. Fischer with several associates formed Skinner Power Systems LLC. and in November 2002 purchased the turbine product line from the old Skinner Engine Company. This transaction included all the Skinner and Dean Hill turbomachinery technology, sales and service. Skinner Power Systems LLC set up its manufacturing facility in Erie at a new modern 14,000 sq ft building and its current location today. After 13 years of successful operations and sales at Skinner, Klaus Fischer was ready to retire for a second time.

In November 2015 Skinner Power Systems LLC. was sold to a larger company, Time Machine Inc. located in Polk, Pa.  Time Machine is a contract CNC machine shop familiar with machining processes required for capital equipment. The combination of the two companies will allow both organizations to grow both in size and customer responsiveness with additional offerings. With this acquisition Skinner name changed to Skinner Power Systems: A Division of Time Machine Inc. and is still located in the Erie facility.

Skinner Power Systems /Time Machine Inc. continue to manufacture Skinner equipment in Erie. We trace our product roots back to the early 1920’s, a product that has been continuously manufactured for over 100 years. Today, the current Skinner steam turbine line includes models that range up to 2,000 HP and all pressures and temperatures to 900 PSIG (63 kg/cm^2g) and 900 deg F (482 deg C) inlet and 150 PSIG (10.5 kg/cm^2g) backpressure exhaust. Our current line of turbines provides existing users of Skinner or Dean Hill equipment with a few unique options.  Equipment that may be half a century old can be replaced virtually with the same type of turbine, with modern upgrades as a factory standard.  In many instances, the old Dean Hill turbines can be replaced with the Skinner SB series line, offering the simplicity of ball bearing rotors, low initial cost, exceptionally high reliability, and absolute minimum maintenance downtime. Practically any part for older Skinner or Dean Hill turbines can be sourced through the Skinner facility in Erie. PA.

Another major facet of Skinner’s new equipment business today is packaging the turbine with other machinery such as generators, pumps, fans, and compressors. In particular, Skinner can build Turbine Generator Sets (TG Set) up to 1.25 MW in either induction or synchronous systems. Company specialist can recommend ideal system equipment configurations and specifications to satisfy customer operating objective.

Additional services available from Skinner include repairing and rebuilding older units. All internal components can be replaced, and new parts built to original specifications. Upon completion of the re-build, the units are tested with live steam, the same as for new turbine systems. Vital replacement parts can be supplied from our parts department on short notice.

Time has not dimmed the commitment of today’s Skinner Power Systems to extend and further enhance those traditions and values that were established many years ago buy Le Grand Skinner. We appreciate all the support from past and existing customers and truly hope to hear from you again for any steam turbine needs you may have for your rotating equipment.

We welcome your interest in Skinner Power Systems.